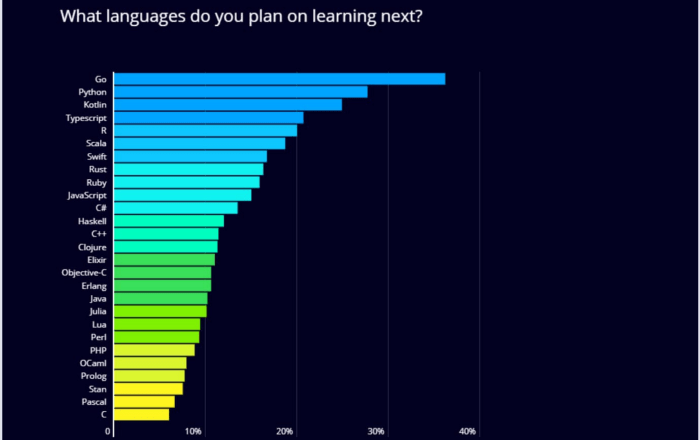 At the Last Futurist, we often wonder what computer programing students and the developers of tomorrow should learn to get a job in the real world.

According to developers in 2020 these are the most wanted software programing languages.

Python continues consistently to hold a top-five spot on Stack Overflow’s most commonly used, loved and wanted lists, it’s clear it should be ahead of Rust.

What is Python used for?

The latest programming language trends claim Python to be especially effective for such domains:

Python is one of the top programming languages for web development. Contemporary social media sites for example use Python.

Now we turn to one of the new kids on the block, Kotlin.

What is Kotlin used for?

JavaScript is used to manage the behavior of web pages. JS is ubiquitous and requires almost no prior coding knowledge — once you start learning, you can practice and play with it immediately.

What is JavaScript used for?

Since JavaScript is among the top programming languages, it is suitable for multiple purposes. Let’s mention some of them.

What is Scala used for?

Programmers can use Scala programming language for multiple purposes. It is suitable for various types of custom business software development projects. They are big data and distributed applications. Platforms that are like databases use scala including LinkedIn, Twitter and Tumblr.

Developed at Google in 2007, Go is a top-tier programming language. What makes Go really shine is its efficiency; it is capable of executing several processes concurrently. Where do we usually find Go?

What is Go used for?

The latest trends in programming languages suppose using Go for the following products:

At the Last Futurist the five most relevant software languages we see trending are Python, Kotlin, JavaScript, Scala and Go, among others. These are the top trends in programming languages that deserve your attention. Special mention also to Swift, Java, Rust, Typescript and C++.

The developers behind Rust wanted to create a language that would make system-level programming more secure and concurrency, i.e., the simultaneous execution of several calculations, instructions, or commands.

In Rust, unlike in JavaScript, for example, developers do not need to set up build scripts; the package manager automatically compiles and links libraries and programs. For these reasons some expect Rust to trend more in the coming years.

Rust is a young programming language designed with today’s requirements in mind – a luxury that many other programming languages ​​lack. It was only in October 2020 that AWS invested heavily in Rust. According to the latest reports, Microsoft is also showing great interest in Rust, contributing to further developing the language and using it for its products in the future.

This article is your standard primer on the top coding languages for 2021. Which appeals the most to you?

Also in case you were wonder:

What Programing Languages Does Roblox Use?

Roblox uses Lua and learning the basics of Lua can take anything from a few days to a few weeks, depending on the time you put into it.

What Programming Languages Does Unity Use?

The language that’s used in Unity is called C# (pronounced C-sharp). All the languages that Unity operates with are object-oriented scripting languages.

What Programming Languages Does Apple Use?

What Programming Language Should I Learn Just to Understand Basic Concepts?

If you’re at the very beginning of your coding journey, you’ll want to learn basic markup languages like HTML and CSS just to get your foot in the door.