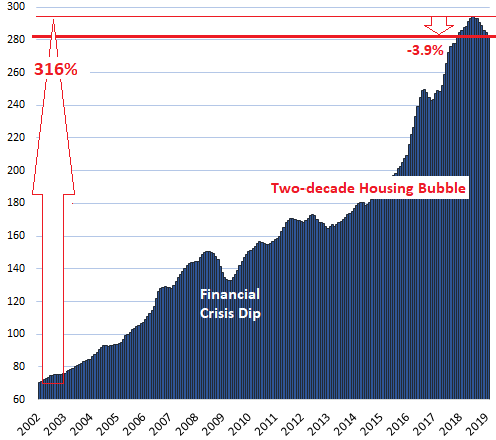 So you knew that Vancouver and Toronto had unaffordable housing? Now, during the pandemic, it’s the entire country of Canada. Around 1 in 5 houses in Canada are actually owned by investors. Many of them vacant. The supply-demand means there is a lack of affordable housing in most cities in Canada.

410,000 people took out new home loans in the second quarter, and the average amount hit a record $355,000. That’s not a sustainable level, given that many of the new buyers won’t be able to afford their new homes when the interest rates go up.

The Bank of Canada has really messed up this time. You think of a housing bubble as a Chinese or an American problem, but Canada needs to be added to the list. There’s also been a chronic lack of new legislation to fix Canada’s housing affordability crisis.

New numbers from Equifax this week confirmed what housing market watchers have known for a while now: Canadians are addicted to mortgage debt. Canadians took out 410,000 home loans in the second quarter. That’s the biggest quarterly jump on record, up 60 per cent compared with the same period a year earlier. The cost of housing is up a stunning 30% over last year’s cost.

How Canadians are buying houses they can’t afford is just startling in the lack of financial literacy in the stimulus era and with the WFM movement. According to a study by the National Bank of Canada, mortgage payments now eat up 45% of an average home owner’s income. That’s above the average since 1983, which is 43%. Think about that for a moment.

The average price of a Canadian resale home topped $716,000 in March. Does that make any sense to you? We’re seeing an erosion in affordability right across the country, no longer just in Vancouver, Toronto or Hamilton and the GTA generally speaking. Taxes are lower in Ontario but there’s a lack of affordable housing if you are moving from another province.

A surge in international students has meant a lot of foreign investors. Now immigration is great for Canada, but it needs to regulate its housing sector better. Canada’s central bank will deliver its latest economic assessment tomorrow, but it’s not looking good for this ailing economy with a housing bubble out of control.

So as of July 2021, despite slowing home sales and cooling home prices, Canadian housing prices are still up 26% year-over-year compared to June 2020. Those are not sustainable rates, which point to dangerous inflation. I’m not an economist, but that’s really not good.

Last week, Statistics Canada revealed an economic contraction of 1.1 per cent in the second quarter. Economists had been expecting growth at an annualized rate of 2.5 per cent. Canada has spent $Billions during the pandemic and, while we are safe, our wallets are not great and we’re making some dumb decisions for our financial futures.

It’s called paper gains built on foundations of debt. Prices that go up forever may make homeowners sleep soundly in their heavily leveraged bedrooms, but many of those paper gains are built on a foundation of debt.

As of June 2021, Canadian household debt Is now 111% of GDP. Does that sound like a healthy number to you? The Bank of Canada will delay rate hikes till 2022 or 2023, and dangerous inflation will continue. The Bank of Canada is predictable at best, a likely 0.50 rise in Q4 of 2022. So the housing bubble is going to float higher, at what cost to the so-called strong banking system of Canada and to its households?

Inflation won’t just be sticky, it could get rather epic as this drags on: stocks, crypto and real estate shoot up like a knife. And what happens when the butter melts? Canada will be in danger. This is not good monetary decision making with central banks following the U.S. Fed. It’s a flawed system because people expect real estate only to go up. But nothing goes up forever.

Governments basically stopped intervening in the credit market in the 1970s and said they were going to let the private sector decide, but all we have gotten for that is a housing bubble. And I can promise you this won’t end well. Generations have been brainwashed into thinking real estate is the golden nugget, but if the bubble crashes, not real estate, gold or Bitcoin is going to save you.

The government can fix the housing crisis by working to reform how we build, who buys property and the incentives we have for investors. But it doesn’t. Because it’s the rich leading the system. It’s a ponzi scheme before the crash, the same as we are seeing on the stock market.

If the average price of a home is over $700,000 what is the world coming to in small Canada? This isn’t Singapore, this isn’t a financial capital like Hong Kong or even Taipei for that matter. This is backwater Canada, from Montreal to Winnipeg, this isn’t lives of luxury. This is ice frozen wasteland Canada. No offense to those living in the great white north!

The shortages in supply we have across so much of Canada, a lot of that demand has been pressuring prices. You basically have to live in the flat Prairies or downtrodden Maritime region to find affordable housing. But how many of you are willing to relocate there? Young people will likely never be able to own a home if this keeps up. Inflation will basically out bid them, even as they net higher salaries as they mature.

Canada’s household debt to GDP I would say is conservatively, astronomical, but it did slip a little lower in this morning’s numbers. Household debt was 111.6% in Q1 2021, down 0.67% from the previous quarter. The ratio remains 7.98% higher than it was during the same quarter a year ago.

Low interest rates and now BNPL at the point of sale in retail are basically like how you scam people into making poor consumer decisions. Mortgages are going to be the downfall of many.

Canada’s economy is not Australia. It isn’t as if we are invincible but we are acting as if we were. Get this, an incredible fact about Canada’s housing market is that it has gone 24 years without a correction. According to Better Dwelling, Canadian house prices have been rising for 24 years without interruption.

That’s triple the length of time the U.S. or U.K. have gone without a correction. While the 2008/2009 correction sent U.S. house prices spiraling downward, it left Canada’s housing market largely unscathed. That’s not a bull market for real estate, that’s the definition of insanity.

O’ Canada, inflation is coming for you and a housing bubble is likely to burst in 2023. The WFM movement and the great resignation for remote workers meant moving to more scenic locations and a financial mortgage crisis waiting to happen in the great reckoning of Canada’s housing bubble crisis. People just don’t understand the pain ahead, but I’m predicting it. That’s why they call me the Last Futurist.

At the Last Futurist we feel the concern of Nova Scotia and New Brunswick residents. They are battling health scares on two fronts….

With Justin Trudeau calling an election during a pandemic, for the 5th time in the last 7 elections we are stuck with a…