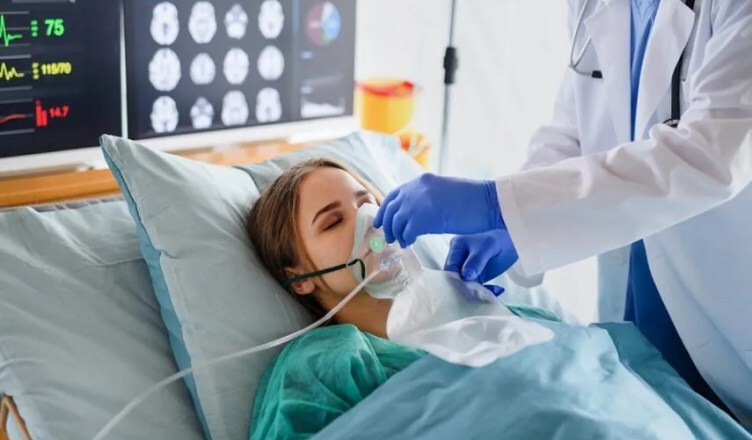 In terms of business ethics, there’s a code of ethics to follow. When $NRXP went up 60% on October 12th, it immediately lost those highs. It’s not rocket science, it’s greed.

NRx continues to pursue regulatory approvals for the COVID-19 drug Zyesami claiming its theirs. NRx revealed that Relief Therapeutics has initiated a lawsuit alleging breaches of their collaboration agreement. Javitt thinks he can swindle Switzerland, and it’s not cool to witness the American pharma industry up close $RLFTF.

$NRXP has about 12,000 followers on Stocktwits, $RLFTF has about half of that, but which do you think is the better stock?

Relief sadly chose the wrong partner. On October 7th, 2021 it announced that it has filed a lawsuit against NeuroRx, Inc. and its Chief Executive Officer, Dr. Jonathan Javitt, for multiple breaches of the Collaboration Agreement between Relief and NeuroRx relating to the development and commercialization of RLF-100(TM) (aviptadil). The complaint was filed in the Supreme Court of the State of New York in Manhattan.

$RLFTF is back down to $0.11, near its pre-pop August, 2020. OTC stocks are still in a major bear market. $NRXP in spite of shady business ethics here, has had a volatile stock on their hands that is prone to major runs, simply because its in the United States. But who really owns the patent?

When lives are at stake there is no time to waste

Relief has a talented team of scientists, determined to do their part to contribute to the fight against the worst healthcare disaster in 100 years, had a brilliant idea to repurpose a legacy compound, RLF-100™ (aviptadil), a synthetic form of a naturally occurring peptide predominantly found in the lung – Vasoactive Intestinal Peptide (VIP) – to protect the lung from injury due to COVID-19.

NRx should not be taking credit for it. Look at the actual partnership details here.

NRx plans to defend itself in the litigation and make counterclaims against Relief Therapeutics. It’s really not what you want to see when Covid-19 lives are at stake. That a doctor is doing this is just incompressible, you can see his LinkedIn here. His is not the owner of Zyesami or its patent holder.

Relief and NeuroRx have taken steps to set up the manufacturing of RLF-100™ to prepare for potential future commercialization. But now NeuroRx is playing dirty.

On October 14th, 2021 an infectious-disease journal published peer-reviewed results of an open-label trial with aviptadil and critically ill COVID patients. An impressive 81% of patients treated with aviptadil survived at least 60 days compared to just 21% of patients given standard care.

If Zyesami wasn’t incredible, would NRx be doing this to Relief? That’s the thing.

On September 21, 2020, Relief and NeuroRx announced the completion of their partnership agreement for the commercialization of RLF-100™ worldwide. A year later it doesn’t seem as if NRx is staying true to the partnership contract. What exactly?

Will American greed and lawyers shut out Relief from this though? It’s hard seeing NRx pull off such a stunt.

Obviously we don’t have all the information but Javitt appears to be in breach of contract. “We are disappointed that NeuroRx has continued to refuse to ameliorate their breaches of the Collaboration Agreement,” stated Jack Weinstein, Chief Financial Officer and Treasurer of Relief.

“While we continue to hope to settle these matters with NeuroRx, we are compelled to bring this action to preserve our rights under the Collaboration Agreement and to allow us to continue to develop RLF-100(TM) (aviptadil) in a timely manner for the treatment of acute respiratory failure due to COVID-19 in our territories.”

NeuroRx should not be hurting their smaller Swiss partner with these moves. If you bought Relief at $0.60, it’s now down to $0.10. It’s the OTC market at large, and not simply the sly moves of NeuroRx that is to blame. Relief is a small but talented biopharmaceutical company seeking to provide patients therapeutic relief from serious diseases with high unmet needs. It has a diversified product portfolio, once it outgrows the OTC, it will be a growing company for Switzerland.

These filings stated that NRx sent a letter to shareholders on Wednesday addressing a lawsuit recently initiated by Relief Therapeutics in New York State Court. Relief alleges that NRx “failed to honor its obligations” under a collaboration agreement between the two companies related to the development of Zyesami (aviptadil).

We have to put social pressure on Javitt to do the right thing in this regard and not only see the dollar signs $. If this treatment can save lives, it should be able to do so all over the world and especially in Europe from where it comes from.

The Swiss drugmaker was always the patent holder for Zyesami. To assume otherwise is pure deceptive behavior. $NRXP isn’t just volatile because it’s a Covid-19 treatment, it’s volatile because its leadership doesn’t exactly inspire good faith. While I would long-hold $RLFTF, $NRXP has become not much better than a day trade or a one week swing play.

NRx plans to continue the development of Zyesami and pursue regulatory approvals and authorizations for the COVID-19 drug. The company also intends to defend itself in the lawsuit and “assert significant counterclaims against Relief.” It’s hard to see what those might be.

Acer Therapeutics is at least a normal partner, and not the nightmare NRx has been. Relief is the likely global winner here however: 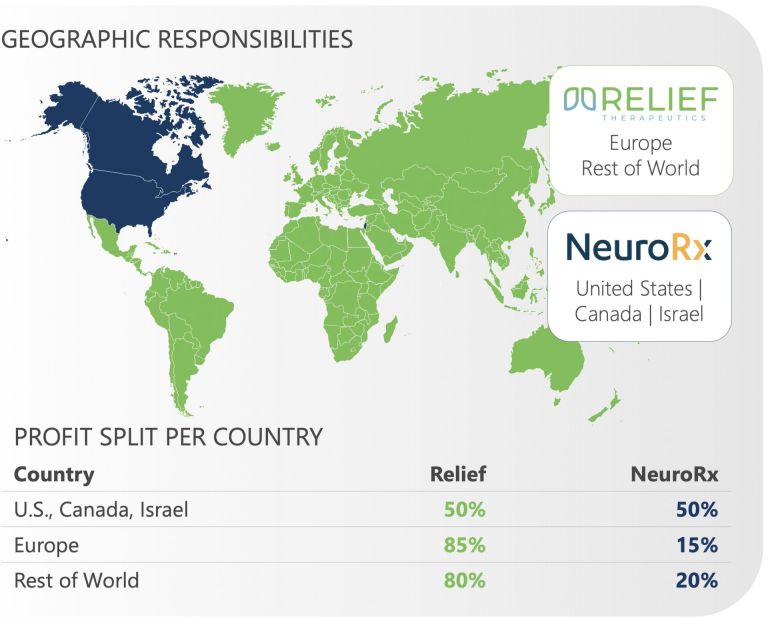 Relief as the patent holder was always the majority share holder. Why does NeuroRx dispute the obvious? Javitt’s antics have likely only delayed things for this treatment which makes the Merck Pill the main treatment in 2022. It’s not good for shareholders of either to disrupt the partnership contract with a lack of transparency.

While the Merck Pill will be more for minor cases, Aviptadil “can even save the lives of patients near death”. Aviptadil “is unique because it was shown specifically to help those patients who were the sickest, they were essentially dying in the ICU ..the study showed 17 out of 21 of these very ill patients survived who were treated with this drug compared to just 5 who didn’t get the medicines so that an 81% survival rate with Aviptadil compared to just 21% who received typical care like steroids, anticoagulants and conversant plasma now again these were the patients who were the absolute sickest who had multiple severe comorbidities they were all in the ICU and they were at the highest risk for death.

If the Delta variant mutates into a more lethal form of Covid-19, Zyesami might actually become a big deal. This has around a 20% chance of happening. Many lawsuits like this one end up with a settlement. Both parties have a vested interest in seeing Zyesami become a commercial success. That’s probably the most important takeaway for investors right now. But if you are a shareholder, you aren’t happy with how this has gone. There is much speculation about it.

NRx Pharmaceuticals announced that a revised Investigational New Drug module on the manufacturing of ZYESAMI (aviptadil) was submitted to the US Food and Drug Administration (FDA), containing documentation that confirmed Nephron Pharmaceuticals is prepared to supply ZYESAMI on a commercial scale. However Relief own the rights at the end of the day.

This module will now be used as part of the FDA’s rolling review process supporting the New Drug Application for ZYESAMI. Take a look at the agreement between NeuroRx and Nephron, sec.gov/Archives/edgar/data. Relief has the patent and licensing for RLF-100.

When it’s a matter of life and death, let’s not screw around with people in ICUs or shareholders. If official figures show nearly 5 million deaths, you know the real numbers are at least double or triple that. Nurses are leaving the profession and the ICUs all around the world. Russia, the UK, Turkey and places like Romania still have a lot of cases. In Russia, Mexico, Romania, Iran and other places significant numbers of people continue to pass in ICUs or before they reach them.

As always follow me on StockQuest for more stock articles. As usual sign up for Stock Quest premium if you want to make a bit of extra money. You can do so here.

Javascript is one of the most popular programming languages in previous years, but lots of people still ask the question, why it’s worth…

Brad Smith calls it a cybsersecurity moment of reckoning, but really what the Sunburst supply-chain hack of SolarWinds Clients is, is a declaration…

With cybersecurity one of the biggest needs of the decade, and technology stocks below $1.00 being potential diamonds in the rough, if this…

As we had been predicting, a new variant with many mutations may be the next super variant. The variant, called B.1.1.529, has been…

We’ve been lied to at so many points about the pandemic, from where it comes from to whether masks can help prevent infection,…

The maker of popular TikTok app has reason to get further into the music world with a free music streaming product. It’s no…